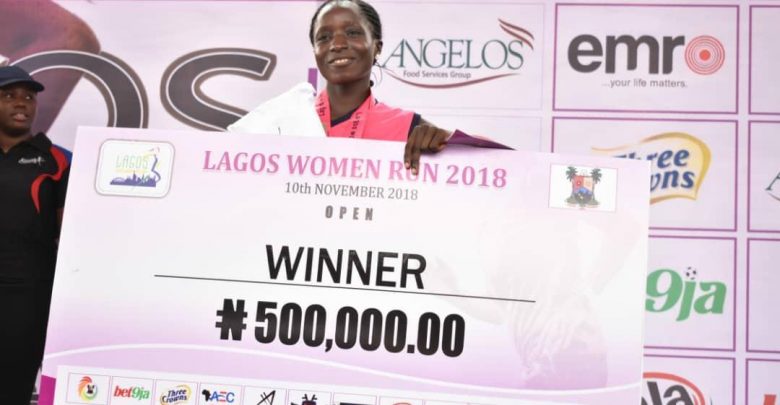 Rose Akusho from Plateau State at the weekend broke the existing record and set a new race record in the 2018 edition of the Lagos Women Run, when she erased the earlier record set by Fadekemi Olude in 2016 which stood at 40 minutes 30: 24 seconds over 10 kilometres.

In weekend’s 10 kilometres Run, Akusho, who gave other runners 10 metres lead, finished at a time of 34minutes 35.07 seconds to set a new Race Record and took home N500,000 as the champion.

Akusho, said after the race, that her performance was due to long term training ahead of the 2018 Lagos Women Run. “Immediately, I registered for the Lagos Run, which was my first time, my coach in Plateau state drew up a training programme for me which I followed strictly weeks to the race.  I arrived in Lagos one week to the race to get used to the weather in Lagos and the route. The result is my victory. I am very happy for winning this 10kilomentres race in just my first time of participation.”

In second place was Hudung Gyang also from Plateau state at a time of 35 minutes 41: 22 seconds. She took home N300,000, while the third place also went to another Plateau state runner, Monica Ezekiel, who finished at a time of 36 minutes 03:27 seconds to take home N200,000, as the trio completed the Plateau state dominance of the Lagos Women Run 2018 as they won the top three positions.

Meanwhile, In fourth place was Charity Agbofure who ran a time of 36 minutes 9:50 seconds. She got N100,000 for her effort. While Dunatu Donatus finished in fifth place at a time of 36 minutes 39:49 seconds in the open category of the Lagos Women Run. She took home N50,000 in the race competed for by runners from ages 20 to 45 years.

In the Veteran category for runners from ages 45years to 70, veteran marathoner, Genevive Njoku won the first position to grab the champions prize money of N200,000. South Africa’s Barene Vankorichbesa finished in second place to take home to take home N150,000 and Karim Bolanle finished in third place. She got N100,000 for her efforts. All the top 10 winners in the Open and Veteran categories were awarded cash prizes, while all the runners got certificates of participation and a commemorative medal each. The medals will be given out to the runners on Tuesday at the Secretariat of the Lagos Women Run inside the Teslim Balogun Stadium, Surulere, Lagos.

The Coordinator of the Lagos Women Run, Tayo Popoola, expressed her delight on the success of the 2018 edition of the Run, especially as it was competed for over a new route which gave the runners the opportunity to see some of the rich cultural and historical perspectives of Lagos state at that axis of the state.”

She added that: “Most importantly, the medical team did not record any casualty during the 10 kilometres run. I was scared when I saw the number of women runners at the Start Point at the Tafawa Balewa Square. When the race was flagged off, I held my breath for some seconds praying that the multitude of runners don’t run themselves over. We thank God everything went smoothly. I also want to say a very big thank   to Bet9ja our main sponsor and the other sponsors who made the 2018 edition of the run thicker than ever before. I want to promise Lagosians that we shall come bigger next year.”