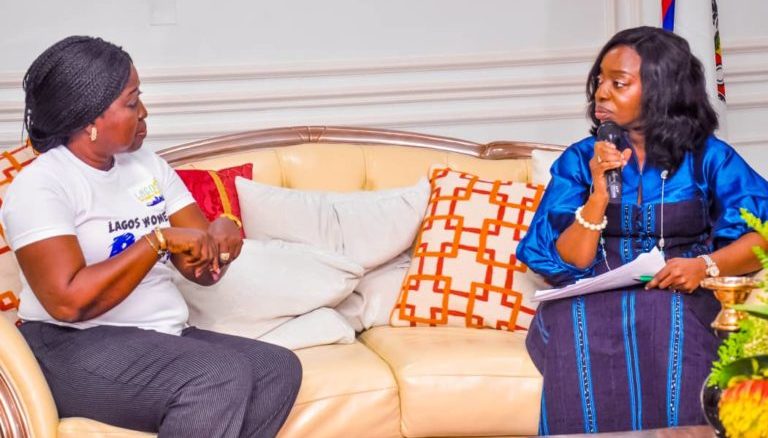 The First Lady of Lagos State, Dr. Mrs. Ibijoke Sanwo-Olu, has endorsed the 2019 edition of the Lagos Women Run, the only 10km run strictly for women in the whole of West Africa.

The endorsement was made at the Government House Alausa at the weekend, when the General Coordinator of the Run, Tayo Popoola, paid a courtesy visit to Mrs. Sanwo-Olu alongside her team of experts.
Dr. Mrs. Sanwo-Olu was elated with the visit that coincided with the 100 days celebration of the Lagos State Governor, Babajide Sanwo-Olu, in office.
She expressed her delight on the theme of the Run: ‘Running for Wellness and Fitness,’ which she said conforms perfectly with a section of her mission for governance as the First Lady of Lagos. She noted that: “With wellness and fitness for women in Lagos state, a lot of positive achievements will be made by women and strange ailments will also be far away from the women’s folks in the state and Nigeria as a whole.
The First Lady who promised to participate in the 10km Run has also accepted to officially flag off the Run from the Start Point at the Tafawa Balewa Square on Saturday, November 9, 2019 at 7am.
The Lagos Women Run will start at the Tarawa Balewa Square, and move through Broad Street, CSS Bookshop, Central Bank of Nigeria, Tinubu Square, Apogbon, Eko Bridge, the coal thermal station and the National Theatre via the National Stadium with the finish line at the Teslim Balogun Stadium, Surulere.
The Lagos First Lady commended the initiative of the Lagos Women Run on their innovative choice of the route for the 10km Run, especially as the route showcased 15 of the various historical monuments in Lagos State.
“It’s just an excellent idea that as the runners race through the Lagos Women Run 10km route, they will as well enjoy the sights of the monuments. This is a very good innovation.”
Mrs. Sanwo-Olu disclosed that, she would participate in the Run alongside the wife of the Deputy Governor of the state, Mrs. Oluremi Hamzat. She urged women in Lagos to register en masse to participate and compete in the 2019 Lagos Women Run.
The General Coordinator of the Run, Tayo Popoola, expressed the delight of her team members at the LWR, for the warm reception during the visit. She noted that, the Lagos First Lady demonstrated full understanding of some of the benefits of the Lagos Women Run 2019, as a medical doctor, which centres on wellness and fitness.
Popoola applauded Mrs. Sanwo-Olu’s magnanimity in accepting to give her full support to the Run and also participate despite the short notice.
She noted that, with 60 days to the 2019 edition of the Run, the LWR secretariat has recorded unprecedented number of entries which far surpassed the number of participants in last year’s edition.
She promised that, this year’s Lagos 10km Women Run will record more successes than ever before.